While there is plenty of recession talk in the air, Todd Burnette, managing director of JLL Fort Worth, doesn’t see it for Tarrant County or for North Texas.

“We’re in the early phases of what I think is going to be tremendous growth in Fort Worth,” he said.

Burnette has plenty of experience with Fort Worth. He came to the city in 1986, shortly after he graduated from SMU. He is now managing director of JLL’s Fort Worth office, which he started in 2002. JLL is a global real estate services company with more than 90,000 employees.

Along the way, he has represented some of the area’s largest names, including BNSF, Lockheed Martin, Bell, Tarrant County, Frost Bank and the city of Fort Worth and negotiated more than 37 million square feet of commercial property leases, acquisitions, and dispositions.

Much of the growth and economic development he sees coming will take place in downtown Fort Worth, Burnette says.

“We’re not in the residential downtown market, but it’s starting to explode, and that will have a big impact on the office market,” he said.

Several more downtown projects are set to be announced over the next six months, and those will drive more and more people to the central city, Burnette said.

“It’s already a really cool place, but it’s becoming cooler with all these new apartments and condos that are being built downtown,” he said.

Companies are looking for ways to attract new young talent, and those young adults living in downtown Fort Worth are going to attract companies seeking a workforce.

“That, in turn, is going to open up the office market downtown,” he said.

The last Fort Worth office tower to be built in downtown was the Frost Tower in 2018. Burnette expects that to change.

“I think you’re going to see an office announcement because that’s what these companies want. They want to attract young, talented employees, and they’re going to be downtown or nearby,” he said.

Burnette compared the area to Uptown in Dallas, which he said is one of the hottest areas in the country right now.

“What they have done is attract all these financial institutions, and they’re vying for the same kind of people,” he said. “Those employees want a really cool space with some great amenities in a fairly walkable-type environment. I think that’s what you’re going to see here.”

Part of the reason for the strong market conditions in Fort Worth is the city is now attracting money from outside the area.

When he came to the city in 1986, Fort Worth was still more of a West Texas town with little money coming from outside the area for large investments, Burnette said.

“It has changed dramatically over the last five years or so,” he said. “Fort Worth is a true gem and the institutional money that’s out there is looking at projects here. That wasn’t the case just a few years ago.” 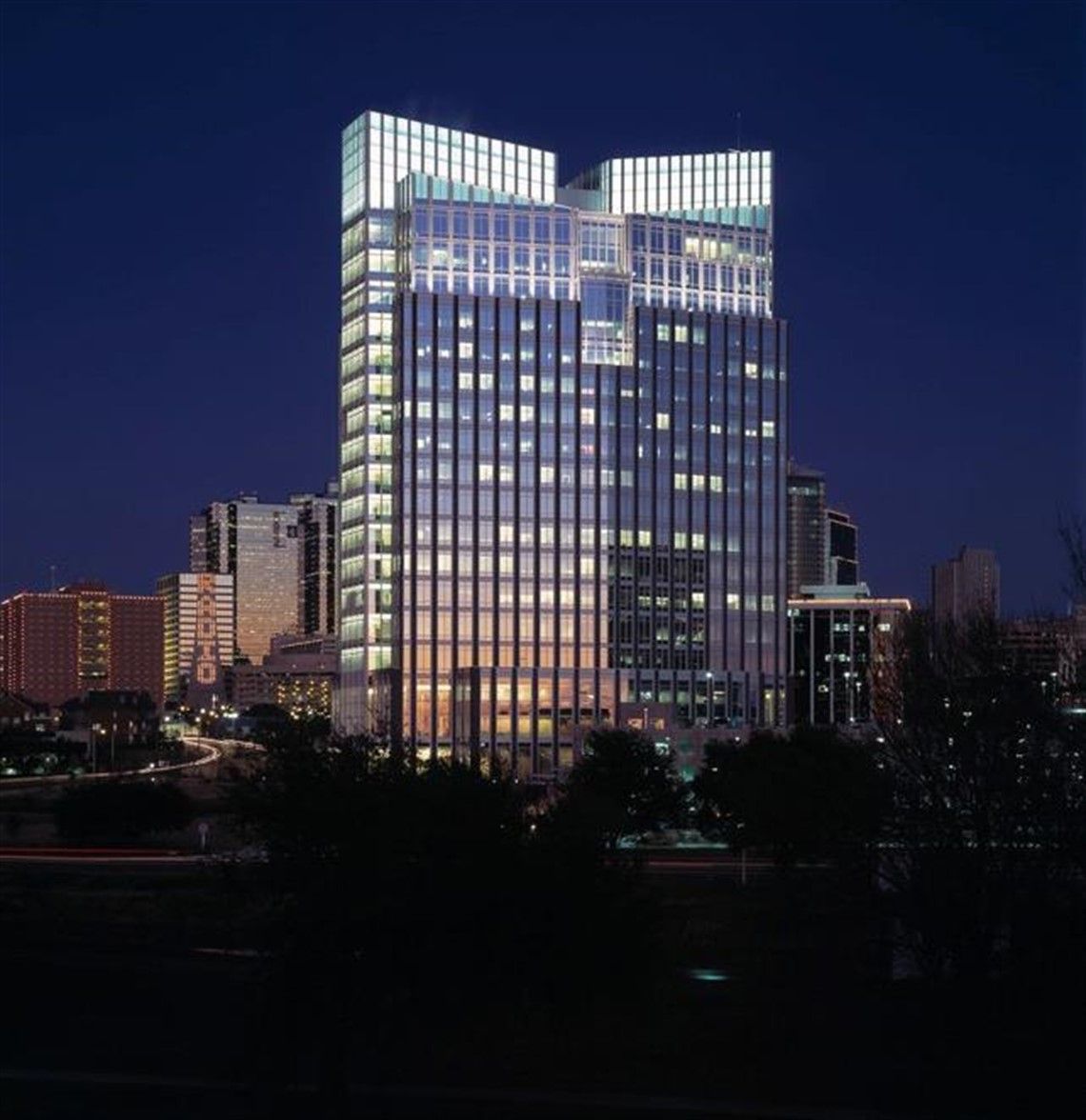 Pier 1 building, the future Fort Worth City Hall (Photo courtesy of city of Fort Worth)

Burnette recalled when he first came to the city, the downtown economy was dominated by three companies: Pier 1, RadioShack and XTO.

“Today all of those are gone, which is unreal,” he said.

Fort Worth lost retailers Pier 1 and RadioShack to changes in market conditions, while XTO was acquired in 2009 by ExxonMobil Corp., which eventually vacated the six buildings it occupied and owned downtown.

Many were fearful that that excess office capacity would hurt the area’s economy, but Burnette noted that all the buildings redeveloped into either hospitality or residential properties. JLL handled the transactions for ExxonMobil.

Burnette expects those trends to continue with the 300,347- square-foot former Oncor Building in downtown, which is currently for sale.

“Like the former XTO buildings, I expect that will become some residential or hospitality-type project,” he said.

JLL is marketing that project.

Burnette isn’t the only one touting the strength of the office market in Dallas-Fort Worth.

“Employment may grow by 11% or more over the next 10 years, creating supportive conditions for office demand over the long term,” he said.

Burnette and JLL have been involved in the Pier 1 Tower for years, first helping Pier 1 sell it to Chesapeake Energy for $108 million in 2008. The building was then sold back to Pier 1 in 2014 and then to Hertz.

“When Pier 1 went under, we went to the city and said, ‘You need this much space and you can get this for pennies on the dollar compared to building something,’” Burnette said.

The city purchased the building in 2021 for about $40 million and will spend another $50 million or so to renovate it.

“It may be the nicest city hall in the country when it opens for half the money,” he said.

Burnette’s positive outlook is bolstered by data from JLL. In a recent report on Fort Worth office space for the third quarter of  2022, JLL notes that office activity around the city is strong, with Class A construction accounting for 88.7% of the development activity, with only downtown and the HEB/East Fort Worth submarkets without any Class A developments currently. There were 538,295 square feet of office space under construction in Fort Worth during the quarter, according to JLL.

Other  analysts are seeing similar strength in the Class A office market in the Dallas-Fort Worth area.

“Looking at absorption rates this quarter, it is clear that tenants prefer high quality Class A office spaces,” said Matt Schendle, vice chairman of Cushman & Wakefield’s Dallas office, commenting on the company’s recent third quarter office report.  “Companies want to incentivize the in-office experience for their employees and quality office buildings continue to be the linchpin for this strategy.”

While Burnette sees downtown’s office market as strong, he is particularly bullish on the southern end of downtown where Texas A&M has announced plans for an estimated $350 million campus and expansion of the current law school. Along with the new campus, the Omni Hotel has announced plans for a $200 million expansion and the Fort Worth Convention Center is set for a major upgrade.

“I don’t think you’ll recognize the southern end of downtown in a few years,” Burnette said.

Burnette said that, along with downtown, other areas of Fort Worth are seeing good office activity, such as southwest Fort Worth with Clearfork and Waterside and, to the north, the Stockyards.

“Twenty years ago Clearfork was just a field,” he said. “Now you have all this residential going in there, some high-end retail and the office space is basically full.”

Burnette expects the next big class AA-type office building to be announced for that area.

The Stockyards area has proven it can be a player in the office market as well, Burnette said.

“When Simpli.fi announced in 2018 they were moving their offices there, many people didn’t see how it made sense,” he said. “Now people can see how smart that was. The Stockyards has proven to be a great place for a workplace.”

Simpli.fi, a technology company, leased 77,000 square feet of office space in the Horse and Mule Barn building in a deal negotiated by JLL.

The biggest limit on the growth of the downtown Fort Worth market is the lack of properties with 300,000 square feet of contiguous space, Burnette said.

“We need more space, and I think it will come,” he said.

But, above all, he doesn’t see Fort Worth or north Texas experiencing an economic slowdown.

“There’s a lot of really good signs, and it doesn’t sound to me like a recession or a real estate market that is in trouble,” he said.

Get notifications for events, news, and press releases.

Search for Issuers by state, issuer name, or CUSIP.

No results match your search term, but we're constantly adding new issuers to the BondLink platform. Looking to learn more?

Thank you! Looking for another issuer you don't see here?

UNDER NO CIRCUMSTANCES SHALL THE INFORMATION ON THE SITE CONSTITUTE AN OFFER TO SELL OR THE SOLICITATION OF AN OFFER TO BUY, NOR SHALL THERE BE ANY SALE OF SECURITIES IN ANY JURISDICTION IN WHICH SUCH OFFER, SOLICITATION OR SALE WOULD BE UNLAWFUL PRIOR TO REGISTRATION OR QUALIFICATION UNDER THE SECURITIES LAWS OF ANY SUCH JURISDICTION. OFFERS TO PURCHASE SECURITIES MAY BE MADE ONLY THROUGH A REGISTERED BROKER-DEALER AND THROUGH AN OFFICIAL STATEMENT.

BondLink has not prepared or developed any of the Content on the Site and the Content available on the Site with respect to any issuer is not maintained by or under the control of BondLink. The content on this Site with respect to any issuer was specifically authorized by that issuer to be communicated through this Site. BondLink has not reviewed such information in any respect and has not checked such information for accuracy, and in some cases, the information provided may not have been viewed by BondLink. The Content contained on the Site has been provided by the applicable issuer and is included for general informational purposes only and is provided without warranty of any kind and, in particular, no representation or warranty, express or implied, is made or is to be inferred as to the accuracy, reliability, timeliness or completeness of any such information. The Content presented on the Site speaks only as of the date the Content was prepared by the issuer or other third party and has not been updated since that date and as a result, may not address all factors which may be material to an investor and may contain omissions of fact or statements that are not accurate because of the passage of time or changes in facts or circumstance subsequent to the date of such Content. Consequently, no person should make any investment decision in reliance upon the Content contained on the Site. See “Terms” for the full terms of use of this website including your release of any and all claims against BondLink for use of this website.